As we approach Thanksgiving Day 2014, I would like to share  an experience of mine from this past week. Before I tell the  story though take a look at this portrait photo that I took of my neighbor:

A proud and serious man, my neighbor. Well I call him my neighbor but I don’t really know him. I just met him in my neighborhood one afternoon last week as I was walking home from work.

I was walking (my camera around my neck as it often is) and coming down some stairs where three people were sitting. They were spread right across the stairs but as they saw me coming they cleared a way for me to get by them. Once past them, the older of the three spoke to me. He said “Do you want to take a picture of three homeless”. I was a little surprised by this but said “Sure, if you want me to”. So he quickly set up on the stair below and between the other two and I snapped this photo: 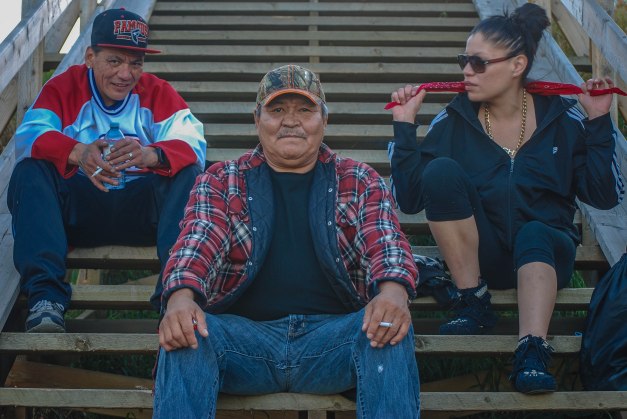 I took the picture, said “I got it” and continued on my way. Nothing more was said but I have thought a lot about this simple encounter since then. Were they really homeless? Would that matter? What was their story? How nice that he/they would just ask to have their photo taken – and pose seriously and proudly. He did not ask for a copy of the picture, just somehow wanted to have his image recorded for posterity. He would not know that I would post this (it didn’t even occur to me at the time) and normally I wouldn’t without the subjects okay but somehow it seems like posting this proud image of my neighbor is the right thing to do.

2 comments on “My Neighbor”