Pyramids in the Valley

The Muttart Conservatory  with its 4 striking glass pyramids is one of my favorite Edmonton landmarks. It is wonderful to be inside the pyramids, each of which is a greenhouse featuring a different eco-system. I don’t get inside as often as I would like but I still enjoy  the pyramids from  the outside. They frequently appear in my photos of the river valley. Here are a few recent (April 2016) images: 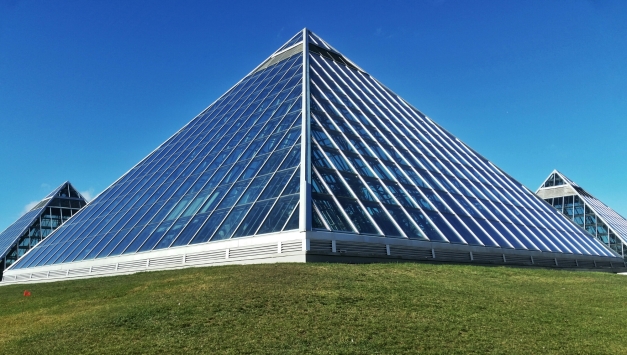 Muttart greenhouse (foreground) where plants are prepped for show and sale.

A peek inside the greenhouse 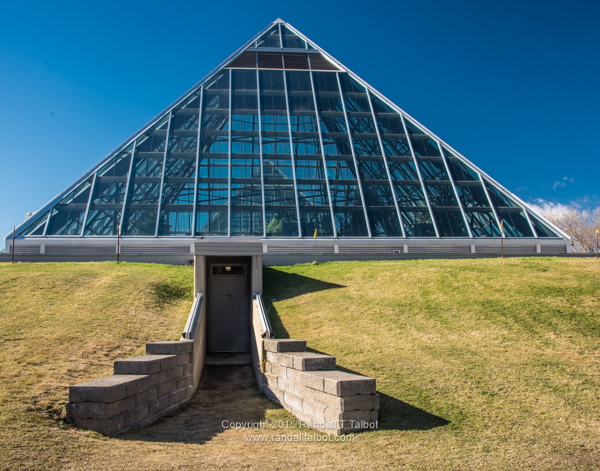 Pyramids on the prairie 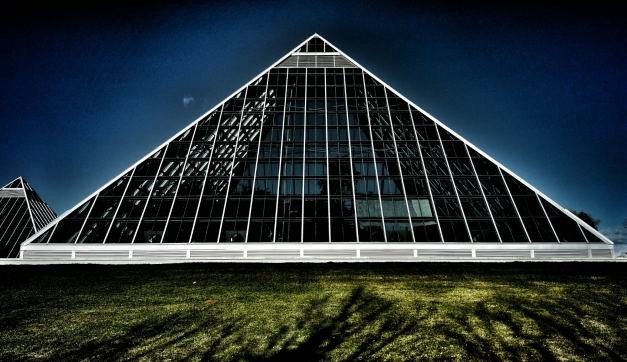 and as a bonus, here is an image from a couple of months earlier (late-February) showing the pyramids set against the nearby Edmonton Ski Club, on the riverbank.

In and Around the Convention Centre 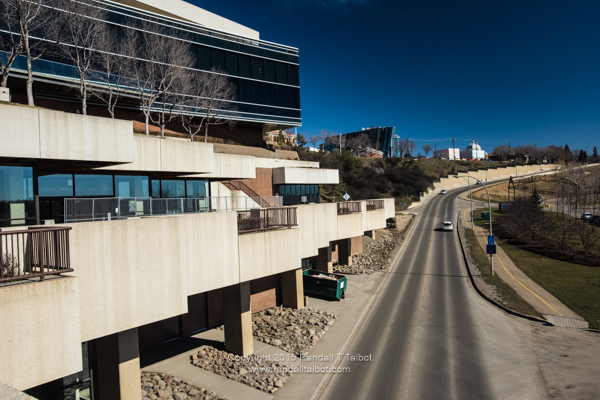 Greierson Hill beside the convention centre

Built into the bank of the North Saskatchewan river valley, the Edmonton’s convention center (or Shaw Conference Centre) is a landmark and architecturally interesting inside an out. Last Saturday as I made my way from the river valley to downtown I passed up by the building and stopped to capture a view things and views that caught my eye: 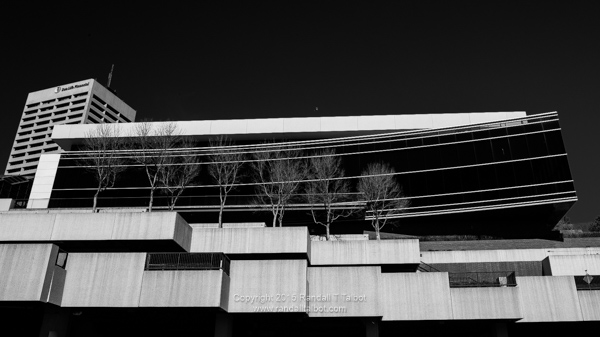 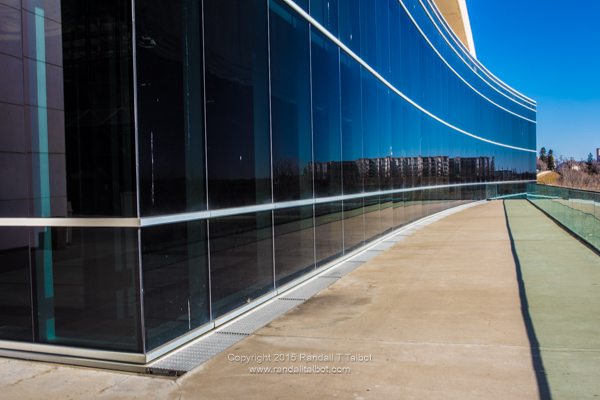 I continued my search today (March 19), for signs of spring in Edmonton. It actually isn’t that hard to believe that spring is officially just a few hours away. Despite some rather cool days this past week, snow is hard to see (in open areas) and the ground and streets have substantially dried up.

My walk today was at Highlands Golf Course in Edmonton’s river valley. Being situated on the north side of the river valley, Highlands has a nice sunny exposure,  so its not to surprising that the fairways are now mostly snow free and the grass is, ever so slightly, starting to green up. Here’s what it looked like:

One of the snowier fairways

I am not what you’d call a big golfer. I might be if I had the opportunity but typically get out only a couple of times each year. Still, I just love the atmosphere of the course and even today I could feel it, and smell it. 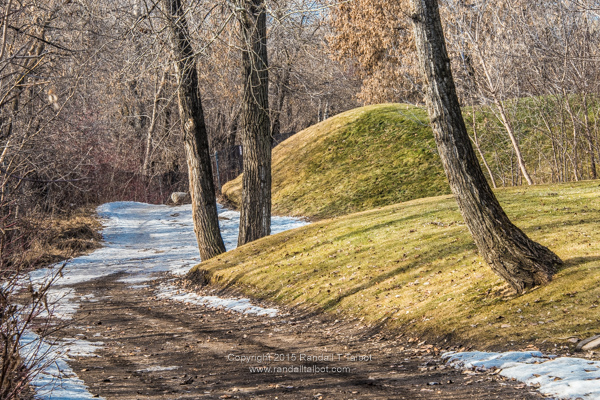 Road on the southern edge of the course 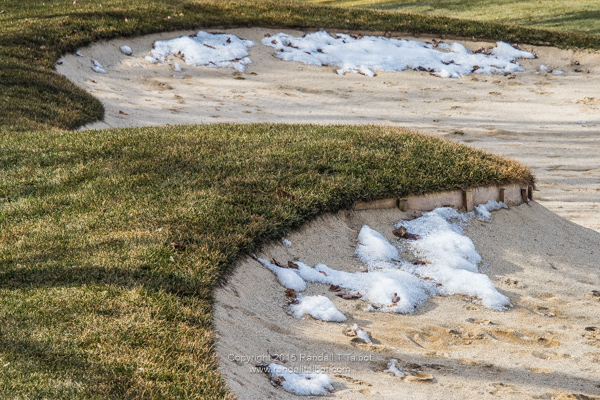 Just a touch of snow on the bunker’s edge

[As an aside, I think it would be really “cool”/bizarre/intriguing/fun/appropriate if some Edmonton area course had a bunker that was filled (at least covered) with snow (artificial for most of the season)]

Steps to a tee box

Winter is in full retreat this year with the mid-afternoon temperature was around 8C as I walked about. This means that the paved path through the ravine is mostly snow free,  with just one or two big puddles across the path in places*. However, I didn’t venture off of the pavement as the other trails looked treacherously icy and/or muddy.

Anyway, here is what caught my eye: 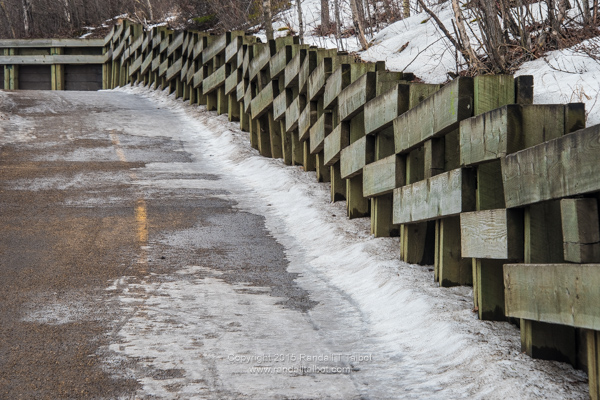 The one icy and treacherous part of the path, leading up to the Connors Road pedestrian overpass

Under the Bridge (at 82nd Avenue)

*A few of my artistic puddle reflection pictures can be seen over on my art blog.

Here it is, the end of February. Even though its been a mild winter in Edmonton, spring can’t come soon enough. Although there are another 3 weeks until the equinox and being Edmonton I wouldn’t rule out a major snowfall until, say mid-May, the changes in the last week are encouraging: the snow is receding and grass is showing, sidewalks are drying, the river ice is getting soft and melt water is running down the streets.

Here are the signs I saw this afternoon:

The North Saskatchewan River in Edmonton in Late-February

The river ice softening around the Edmonton Queen 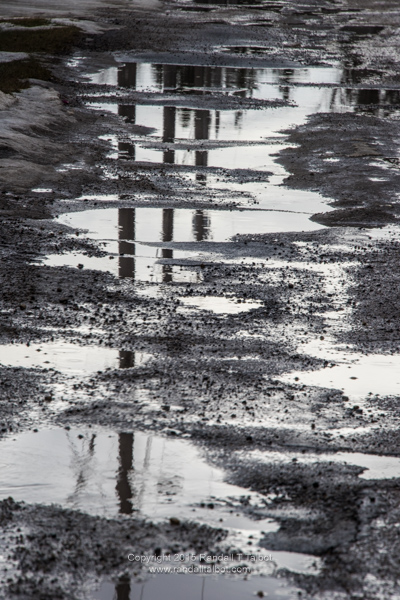 The river ice breaking up 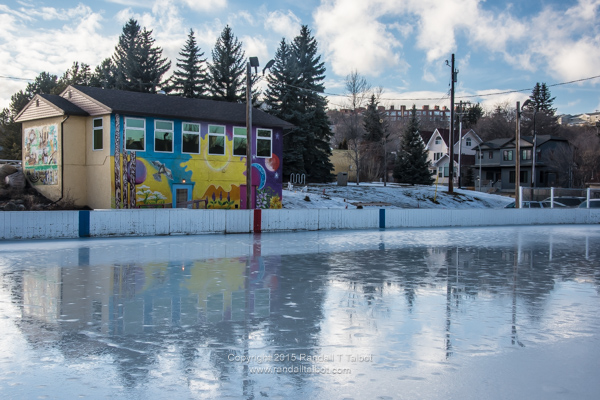 The seasonal end of the outdoor rink

Here are some images from Edmonton’s North Saskatchewan River valley in mid-February: 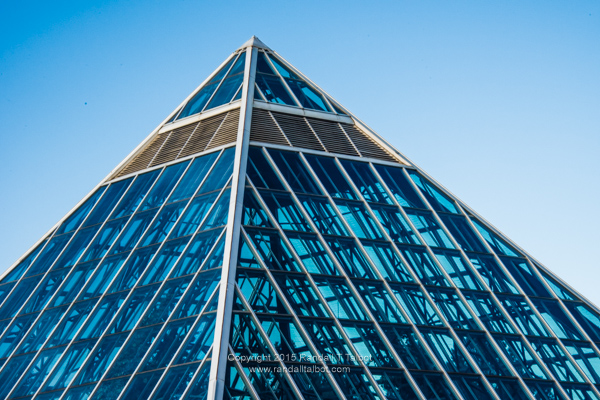 Blue Tip of a Muttart Pyramid 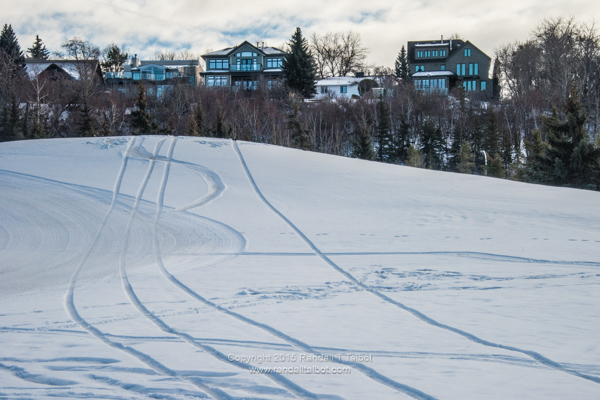 Top of the Hill

Love In the Snow

Fitting for Valentine’s Day 2016 in Edmonton, this huge declaration stomped in the snow on the frozen surface of the North Saskatchewan River: 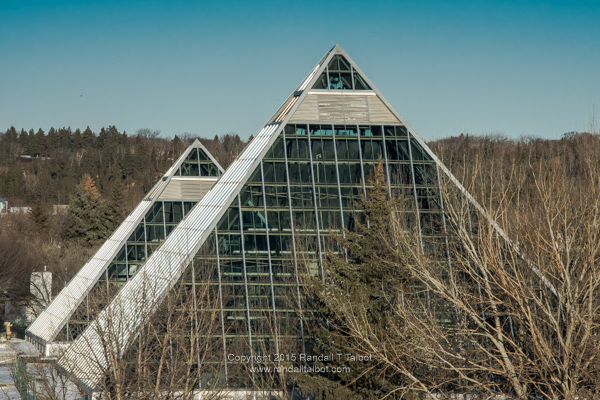 A Couple of Muttart Pyramids

A Place for Two in Cloverdale 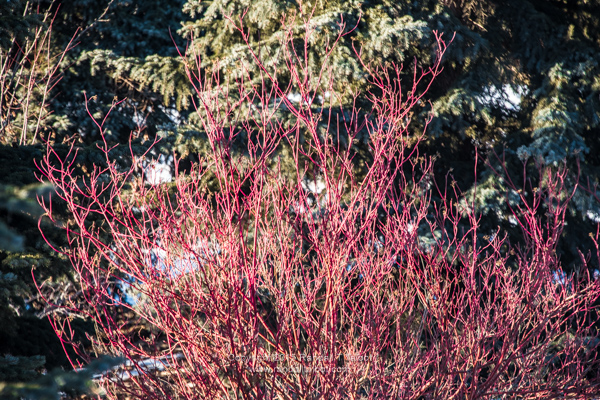 It was a beautiful sunny and warm, mid-February afternoon in Edmonton and I got my cross-country skis out and over to the Riverside Golf Course. Warm weather in January had made the snow conditions deteriorate and had it not been for the 10 cm of fresh snow a couple of days earlier I probably would not have even tried skiing.

The conditions weren’t  bad (in some places) but not good (in other places). The bad places were those where the trail had been getting direct sun for a good part of the day. As a result these trails were a sticky semi-frozen slush. On the other hand,  trails that lay in the shade all day (like the southside of the East-West running fairways) were superb. Even with +5C temperatures the recent snow was very nice and the skis glided along effortlessly.
Being already late in the season, in an warmer than normal winter, I don’t expect a lot more opportunities  to get out skiing but do hope to get out at least one more time this long weekend.
Skiing in the river valley – another of the things that makes life in Edmonton so enjoyable.

An unexpected bonus while out at Riverside was having a close encounter with a coyote. We passed about 20 meters apart, briefly stopping to look each other before carrying on our ways. (Sorry no photo of it). 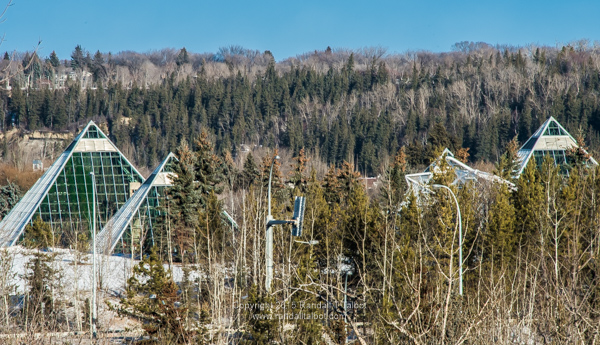 Low Level Bridge (from below the James MacDonald)

The first set of images from this photo-walk can be seen on the prior blog post: Different Perspectives.

A walk this afternoon (2016 February 6) through the river valley, revealed a few perspectives of Edmonton that I usually don’t see. For the record, it was a beautiful afternoon – mostly sunny with temperatures well above seasonal averages and well above zeros. There were however very gusty winds and I was worried that if I was standing on ice (of which there was a lot) when a gust peaked I could have gone sailing. Alas I found good footing at the times of the worst of the winds, so no falls and photos that I am pleased with:

Under the Low Level

Under the James MacDonald

Skyline, Park and Frozen River on a February Afternoon

Watch for an upcoming follow-up post for more Edmonton photos taken this afternoon.

YEGmonton
Create a free website or blog at WordPress.com.