I continued my search today (March 19), for signs of spring in Edmonton. It actually isn’t that hard to believe that spring is officially just a few hours away. Despite some rather cool days this past week, snow is hard to see (in open areas) and the ground and streets have substantially dried up.

My walk today was at Highlands Golf Course in Edmonton’s river valley. Being situated on the north side of the river valley, Highlands has a nice sunny exposure,  so its not to surprising that the fairways are now mostly snow free and the grass is, ever so slightly, starting to green up. Here’s what it looked like: 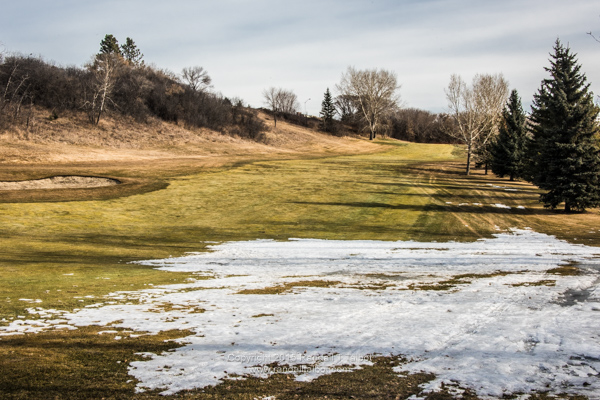 One of the snowier fairways

I am not what you’d call a big golfer. I might be if I had the opportunity but typically get out only a couple of times each year. Still, I just love the atmosphere of the course and even today I could feel it, and smell it.

Road on the southern edge of the course

Just a touch of snow on the bunker’s edge

[As an aside, I think it would be really “cool”/bizarre/intriguing/fun/appropriate if some Edmonton area course had a bunker that was filled (at least covered) with snow (artificial for most of the season)] 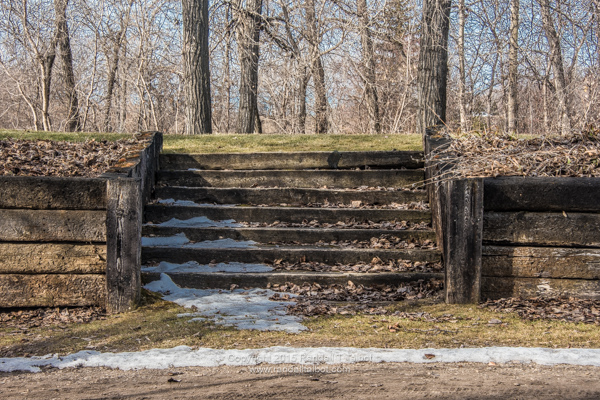 Steps to a tee box